The Aoi Matsuri is known as one of the three major festivals of Kyoto along with the "Gion Matsuri (Gion Festival)" and the "Jidai Matsuri (Festival of the Ages)".
From The Kyoto Imperial Palace to Shimogamo Shrine and Kamigamo Shrine, over 500 people go walk in elegant procession like the Heian picture scrolls, through Miyako-oji Street.
It is the ancient festival, and all the procession is decorated with bamboo leaves.

It is a ceremony to decide the relative merits and combinations of horses prior to the performance of "Kamo Horse Racing" on May 5. This is a heroic Shrine ritual and is registered with the Kyoto City Intangible Cultural Property. 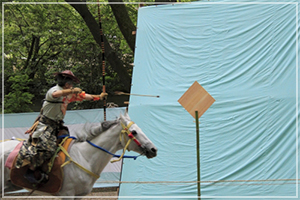 "Yabusame Shinji" is a Shrine ritual to pray for safe journey of "Aoi Matsuri".
At the riding ground in the "Tadasu no Mori", an archer wearing a costume of the duke riding a galloping horse shoots a target.
It is a very spectacular and popular event of shooting out while running a horse. You can not see the "Yabusame"（the art of shooting arrows on horseback） wearing the costumes of court nobles elsewhere.
When the arrows hit the targets, it is believed that "Gokoku"（an abundant grain harvests）are promised and wishes come true. 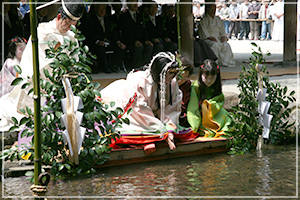 "Saio-Dai Misogi no gi" is the ritual that Saio-dai（the heroine of Aoi Matsuri）and forty women who participate in the Nyonin-retsu（women's march）involve in soak their hands in the Mitarashi-ike pond and purify themselves. It takes place at Shimogamo Shrine and Kamigamo Shrine every other year.（In 2020, it was held at Kamigamo Shrine.）

"Busya Shinji" is a Shrine ritual to purify the street of the "Aoi Matsuri" to keep out of harm's way.
The archer exorcise evil spirits by making a sound pulling a bow string called "Hikime-shiki". And "Yagoshi-shiki"（fly the arrow through the roof of the tower gate）, "Oomato-shiki"（shoot a big target）, "Momote-shiki"（shoot arrows one after another）are held. 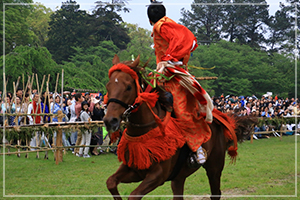 A jockey dressed in the costume of "bugaku"（court dance and music） rides on a horse and splits into left and right.
After the ritual, at around 14 o'clock, "Kyouchi"（a contest to compete for speed）begins at the riding ground in Kamigamo Shrine.

"Mikage matsuri" is a Shrine ritual to welcome the spirits to Shimogamo Shrine from Mt. Mikage at the foot of Mt. Hiei ahead of "Aoi Matsuri".
Around 16 o'clock "Kirishiba Shinji" is performed and the dance of "Azuma Asobi no mai" dedicated to the gods. 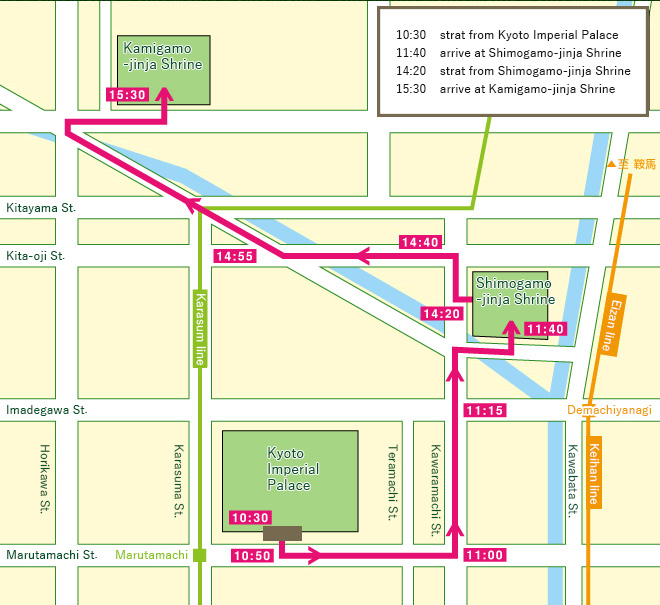 Order and contents of parade

Three horses on each side lead the parade. The horseman of the horse race of Kamigamo Shrine serve as Ridder.

He is the third officer of the imperial police bureau in Heian period. He lead the lower role and watch for the procession.

He is the second officer of the imperial police bureau. He is the chief officer guarding procession.

They are the official who ruled Yamashiro, and his followers. As Shimogamo Shrine and Kamigamo Shrine are both Rakugai （outside of the capital Kyoto）, they are the jurisdiction area of the governor of Yamashiro Province. So Yamashiro tsukai are in charge of guarding.

It is a chest containing the gohei plaited paper streamers used in Shinto, and is offered to the gods of both Kamigao and Shimogamo Shrine. Hakucho（the ordinary person or inferior servant）carry Karabitsu（Chinese-style chest）made of plain wood winding Shimenawa（a sacred rice-straw rope）.

He is an officer of Kuraryo（Bureau of Palace Storehouses）, and manages gohei.

He is the sixth military officer mastering of running horses. He rides on horses and has a bow and arrow on the chodogake（a stand for archery）.

It is generally called Goshoguruma. The ambassador rides the car that decorated wisteria flower ahead eaves and let the cows draw them.Gissha is followed Ushiwarawa（a person who handles ox cows）, carter, carpenter etc, with another cow.

It is called Soume. It is a horse that the Gods see, run before the God, and Mebu lead two horses.

It is a Japanese harp with the name of "Kawagiri". It is brought to the front of the dancers for the performance to the gods.

He is the fifth-ranking military officer of the Konoe-fu（Headquarter of the Inner Palace Guards）, who is proficient in Japanese dance, serve as a dancer on this day.

He is the fifth-ranking military officer of the Konoe-fu.He sings songs at the Shimogamo Shrine and Kamigamo Shrine, and plays musical instruments.

He is the undersecretary of Kuraryo (Bureau of Palace Storehouses) and the fifth-ranking concurrently with civil and military. The envoy embrace the Saimon（address to the gods）serving in front of the altar.

He is an imperial envoy and the highest ranking person in the procession. Because Shii Konoe no Chujo（Middle Provincial Guard at junior fourth rank）serve, he is also said Konoe Dukai（The acting Imperial Guard delegate）.

It is a replacement horse of Chokushi. It prepares for their way back.

It is the umbrella decorated of seasonal flowers (artificial flowers) such as peony and Kakitsubata （Japanese iris） on the large cap.

The flower is different from the above. It is the closing of the column.

She is a high-ranking court lady weared Kouchiki（a two-layer women's kimono）. She holds an flower umbrella over herself.

She is court lady who serves meals in the inner palace.

Once an unmarried Imperial prince served as Saio-dai, but Saio-dai is currently chosen from unmarried women living in Kyoto. The Saio-dai wears a splendid juni-hitoe（twelve-layered ceremonial kimono）that weighs 30 kg. She rides on a palanquin called Shihougoshi that are opened on all sides and fitted with misu（the bamboo blind）.

She is a clean shrine maidens（mikanko）with Saio, and she is so called because she sends on horseback.

He is a public officer who plays Gagaku of Kuroudodokoro that is responsible for the items and accounting of Sai-in（Imperial Princess appointed to serve the deities of the Kamo-jinja Shrines）. He has his own instrument.

It is decorated a cherry blossom and a tachibana in addition to a hollyhock and a katsura. The decoration is different from that of the main row. It is an ox carriage of Saio, and are also said Nyoubou guruma（a cow carriage for women）.

Shato no gi is a ceremony that takes place at the head of both Kamigamo Shrine and Shimogamo Shrine after arriving at each. After the Imperial envoys read the saimon（address to the gods）and dedicate gohei plaited paper streamers used in Shinto, hauling sacred horses and the offering of "Azuma Asobi" dance by the dancers are held.

※Contents of this page are information at the time of publication. Please check in advance when going out, as it may change.